Physics. Physics in a game are very important. They control your jump height, how fast you move, and your momentum. All things that are incredibly important to a platforming game. In every game that I review, I make a big point of discussing how tight the controls are, and these factors directly influence those. Every platformer needs to nail these absolute fundamentals, or it will fall flat, and won’t play well. You don’t want to be failing a jump because a jump doesn’t feel as it should, and you want to have complete control over the way your character turns. Odd, or confusing character movement makes a game frustrating, and when a game is frustrating because it doesn’t control well, it’ll lose players. Platformer character control is the single most important factor in such games, and physics a major part of that. 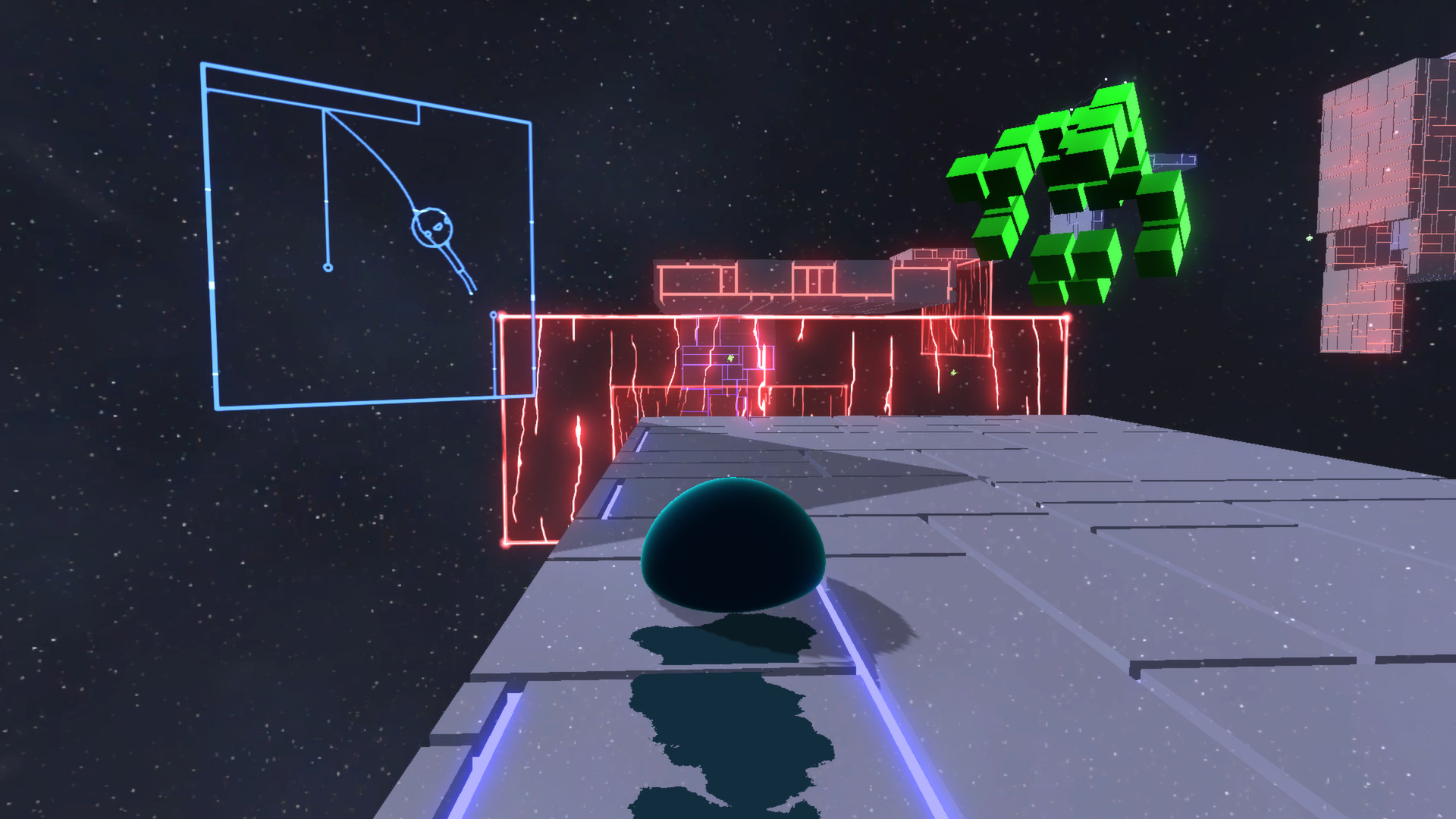 So in the case of Grapple, a game that provides the player with a very unique mode of travel, it’s especially important that they nail it. And boy, did they. Grapple plays like the Spider-man game I’ve always wanted, and for someone who absolutely loved Spider-man 2 on the PS2, that is some serious praise. And now you’re confused, and I can see why. Grapple, on the box, doesn’t look anything like a Spider-man game. You play as an amorphous blob, who I took to calling Blobby, that has to jump between platforms to get to the end of a level. Sounds like a platformer, right? “But James, you said a Spider-man game.” And here’s why. The main mechanic of Grapple is, take a guess, grappling. You fire tendrils out of your body at walls, in a way not unlike the Venom symbiote, and then use your weight and momentum to control where you end up, quite literally webslinging. The tendrils themselves have mass and tensile strength, too. This causes them to behave like ropes, so you can wrap them around objects to shorten them and provide yourself with acceleration. It’s an extremely cool mechanic, but one that does take getting used to. The range on the tendril shot is especially something that can be frustrating, and even 40 levels in I haven’t quite gotten a hang of it. If you’re not sold on the Spider-Man comparison, you can also climb walls, and use them to platform in ways that allow you to attack jumps in a variety of different manners. These two, kinda typically unseen mechanics, combine to create an imaginative and very challenging platformer, and one that makes you think outside the very sterile “how well can you jump” ideas that the genre relies on. 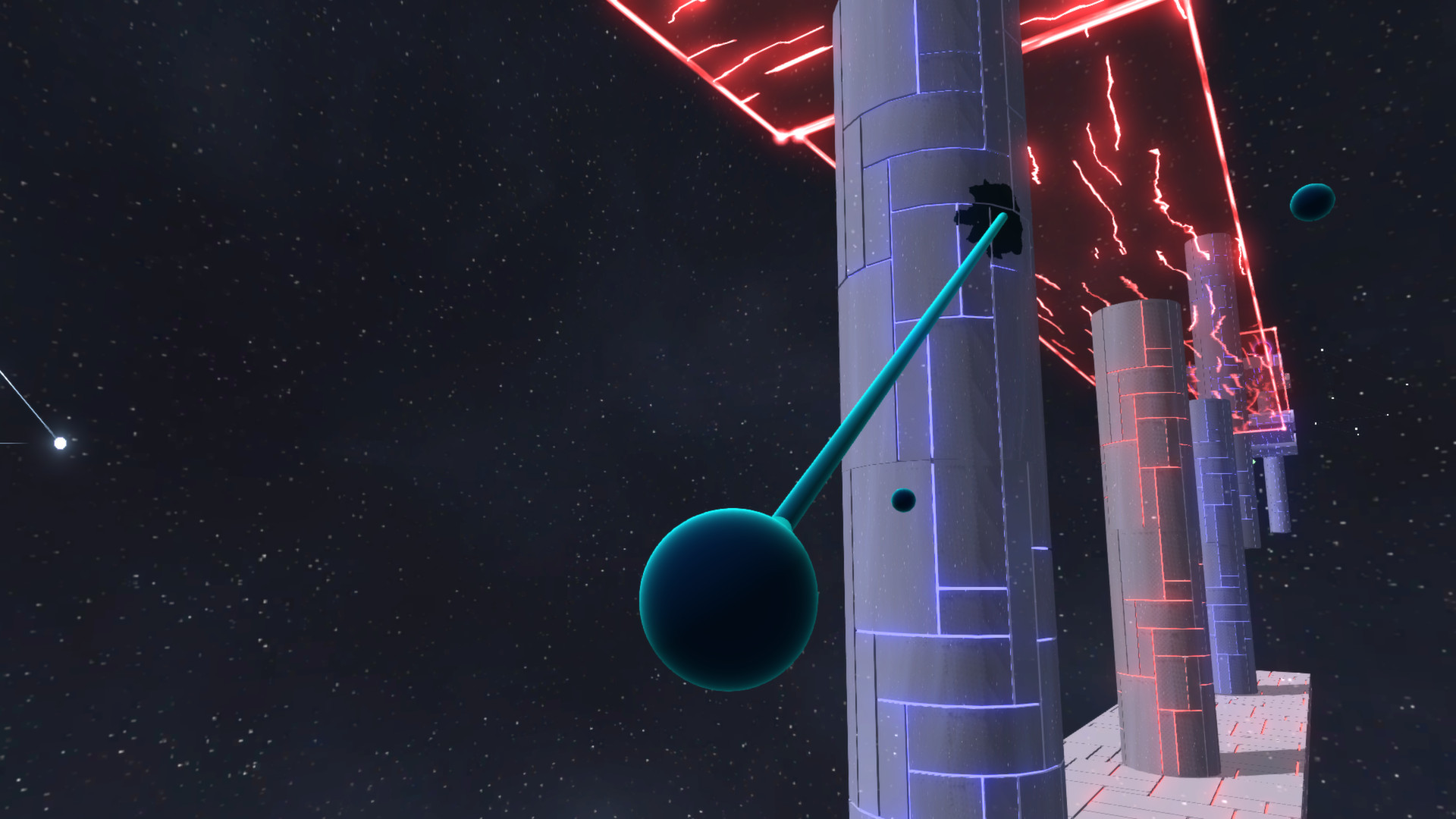 The way that the game teaches you its mechanics is interesting, too. Tuesday Society have chosen to approach it with a “show, don’t tell” mentality, and to that end, each mechanic is introduced slowly. When you first learn to jump, the whole level is about jumping. The next, longer jumps, further ones. Wall climbing is introduced as a way to get up walls first, and then as a way to move around corners and around spheres once you’ve mastered that. Later still, the grappling becomes a part of the game, firstly as just a tool for swinging between platforms, but eventually as a method for looping around blocks, diving, and even doing somersaults in the air. Each trick, and each acrobatic flourish that you need to perfect to be able to get where you need to go is taught steadily, and in a way that makes sure you fully understand it before you go any further. Games that teach mechanics like this are few and far between, and ones that perfect it are often seen as shining examples of pure gameplay. Mega Man X, with the way it teaches wall jumping, and Shovel Knight, with the downwards shovel jumping, educate the player in ways similar to this, and it really helps make both games stand out as platformer games. There’s a fine line to tread between holding your players hands, and not teaching them at all, and Grapple, along with the two games mentioned here, tread it well.

It’s important to learn those mechanics well because Grapple is purely about getting from the beginning of a level to the end. There’s no necessary collectibles, and picking up the few that are there, are simply rewards for mastering the traversal mechanics. They get you achievements, but nothing else, and it’s refreshing to not have to worry about them.

And that’s it. Grapple is incredibly simple in design and incredibly complex in execution. Its fluid, and it plays unlike any other platformer I’ve played before. It features a wonderfully simple soundtrack that fills the atmosphere and doesn’t distract, and the art style is crisp as well. The bonus mode of speed running levels adds to the game by providing extra-challenging content to beat, and a game with this format needs that desperately. Extra content is always good, and stuff that’ll keep you trying is a great way to retain players.

If you’re into the platformer genre at all, and if you’re looking for a third-person platformer that does things you haven’t seen before, I highly recommend Grapple. It’s imaginative, beautiful, and when you get that last swing right, it’s an absolutely joy to play. If you’re looking for gameplay, we also ran a video investigation in how the game plays. It can be picked up on Steam now for £5.

This site uses Akismet to reduce spam. Learn how your comment data is processed.